In early 2020 I created a Twitch stream that I stream on some (but not all) weeks. The series is informally titled Twitch Solves ISL (here ISL is IMO Shortlists).

I also upload past broadcasts to YouTube. A Discord server also exists centered around the stream.

You can find a schedule for the stream, also below. Friday night at 8pm Eastern is the usual time.

Software used on the stream includes:

Here is a picture of my physical setup (click to enlarge). 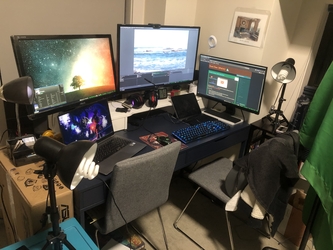 Archive of past problems#

Here’s an archive of the problems solved on stream.

To submit a problem: Problem requests are processed for 256 channel points each; points are earned by watching the live stream. Requests must be submitted at the start of the stream, 8pm Eastern time every Friday. Then the viewers vote on which requests to take (with points refunded if your request is not processed). Because of large demand, I do not take advance requests.