These are FAQs about high school and college.

S-1. Why did you transfer from Harvard to MIT?#

S-2. I’m interested in learning some higher math. Where can I start?#

If you like my writing and are comfortable with proofs, try my Napkin. It was basically written to answer this question. Other possible references are mentioned in Recommendations.

S-3. How do you live-TeX your notes so quickly?#

S-4. How did you take undergraduate / graduate math classes in high school?#

Context: in high school I five classes from UC Berkeley and San Jose State total; you can see the notes I took.

The main limiting factor is getting your high school to let you run off. Every college professor I’ve met is more than happy to help out a high school student who is interested in learning more math. (This may be untrue at certain top schools just because those professors get more audit requests than they can actually accommodate.) It’s the high school bureaucrats that put their foot down.

Talk with your high school administration and see if you can strike a deal. If one person says no, talk to someone else. You have to be aggressive with these things to make progress, because otherwise the administration has no real incentive to help you.

S-5. What are your thoughts on high school math research?#

I’m pretty cynical of it. The (buzz)word “research” itself is a red flag for me: it sounds like the kind of thing people want to say they’ve done, rather than want to do. I won’t say it’s always a bad idea, but I think you should really ask yourself what you are hoping to get out of it. (You should definitely not attempt math research just because you see other people doing so.)

On the topic of research, some excerpts from Euler Circle which I agree with:

You may be familiar with high-school “research” in biology, where a high-school student works in a lab over a summer, mostly doing menial tasks like cleaning test tubes, and is rewarded with a paper to publish or to present in science fair competitions. . . . There is no mathematical equivalent of cleaning test tubes.

You simply cannot expect to work for a few months over the summer and have something to show for it. An exceptional high-school student should expect to spend around 1000 hours over the course of two years on research in order to have a reasonable (but far from certain) chance of producing a publishable paper.

Nonetheless, there are good research-based programs out there. Consider programs like PRIMES, Euler Circle itself, or finding a professor near you.

With that said, if a high school student is interested in higher math, my personal recommendation is to also learn new subjects. (See S-2 and S-6 for hints on how to do this; it’s possible to do this alongside good research projects too.) Reason: there is way, way too much math to learn beyond the calculus / linalg / multivar.

I put it this way: look at the Napkin topics diagram. All of this material is stuff that a strong undergraduate is likely to learn over their four years of university, and more. (It does not include most graduate-level topics.) Each of these nodes has at least as much theory as olympiad Euclidean geometry (and in many cases the comparison is off by an order of magnitude).

Patiently learning foundational material is admittedly neither flashy nor attractive. (There’s no equivalent of Regeneron STS nor does it help much with your college apps.) But I think long-term it is more useful to study fundamentals than rushing to collect honors.

S-6. I want to take some advanced math classes from nearby college, which ones do you recommend?#

Short answer: If you can read and write proofs, then

(If you aren’t comfortable with proofs, you should learn that first. See C-5 for advice on that.)

I am assuming you are interested in learning a lot of math eventually (rather than, say, learning math for the sake of physics / engineering / etc., which is fine, but then this advice is not for you). In that case, I think both linear algebra (as it is usually taught) and multivariable calculus are significantly overrated for people who (a) know how proofs work, and (b) want to pursue higher math.

Linear algebra is useful, but when taught as a standalone class, you will mostly be doing manipulations with matrices. It’s not a bad thing, but I think it’s not something that needs to take one whole semester if you’re going to eventually redo the whole thing abstractly with $k$-modules anyway. I would rather spend the semester learning abstract algebra as a whole (which includes the abstract treatment of vector spaces), which is the language required to do anything algebraic. Many higher level courses are going to assume you know what a domain is, an ideal is, etc. and you would like to learn this as soon as possible.

Multivariable calculus and ordinary/partial differential equations is a bit of a dead end, in my opinion, unless you are interested in these topics for their own sake (in which case you should just learn them, not let random strangers on the Internet tell you what to do). Real and complex analysis, together with enough point-set/metric topology to go with them, are more valuable as core material: many higher level courses are going to assume you know what a compact set is, a real manifold is, etc. and you would like to learn this as soon as possible.

I think the reason that linalg/multivar are so popular is that you don’t need to understand proofs to take these classes, so they appeal to a broad audience. But if you do understand how to read and write proofs, you are quite lucky, and you have some better options available to you for where to explore next.

You are asking the wrong person; I am not an admissions officer. Instead, you should read mitadmissions.org. For example the post Applying Sideways will literally tell you the answer to this question, even though it’s not the answer you want to hear.

I have nothing to add to this. Really.

People always want to believe there are some mythical criteria or hidden goals in the admissions process, a closely guarded secret held from the public, and hence the best route is to find out this insider information. No, seriously, just listen to the people who do admissions for a living. MIT is not the Illuminati, even if it is a subsequence.

S-8. Is it worth looking at olympiad problems in college if I didn’t do competitions in high school, or should I just stick to college math classes?#

The short answer is that it depends on what you want.

The model you can have in your head is something like follows:

That means, depending on what you want, there are a lot of possible answers. Here’s a few.

And so on. In short, it depends on what you’re hoping to get out of your time. The example scenarios above are totally black-and-white, but your situation is likely to be more complicated, say, a mix between these. 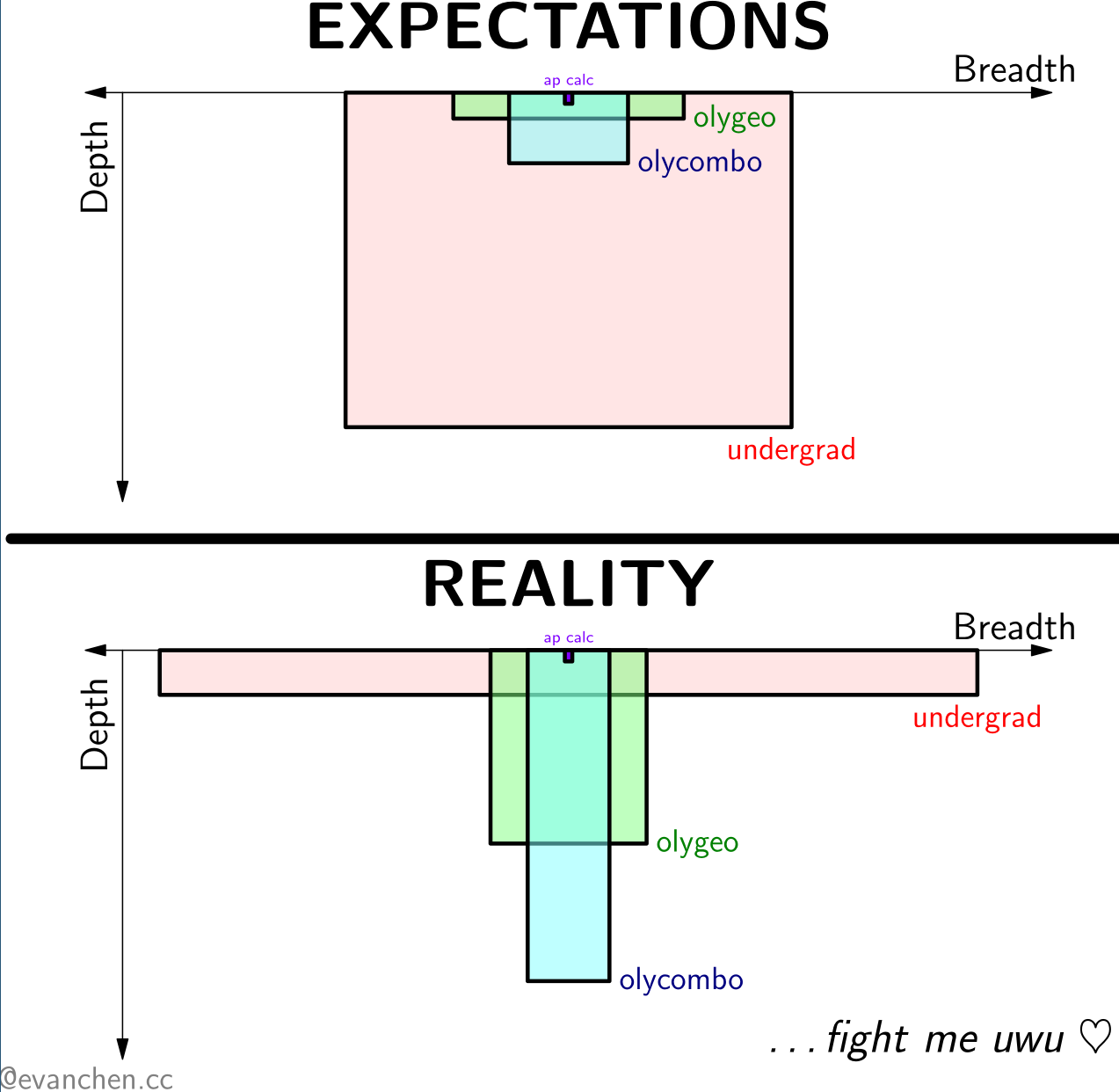