These are FAQs about software I use. You might also see LaTeX FAQs.

X-2. What programming language should I learn first?#

I recommend Python but plenty of other languages are OK too. Prospective competitive programmers (IOI, etc.) should learn C++.

I personally anti-recommend PHP and JavaScript because I think weakly typed languages are not good for learning. (I have no stance on duck typing vs static typing though.) HTML and CSS are not programming languages, they are markup languages.

If I had to summarize this in one word, it would be “control”.

I insist my computers are fully transparent and configurable. I want to be able to see every dial and knob and turn them as I please. In exchange, this means investing time to learn how my computer works, doing my own homework (aka search engine) whenever issues arise, and writing my own tools when no existing software fits my needs. This process is time-consuming but I enjoy it so I am happy with this cost.

Also, Linux package management is amazing. If one day I hear about a program called Geogebra, I can install it by typing sudo pacman -S geogebra into my command line (here pacman is the Arch Linux package manager). That’s it. You do not even need to open a web browser.

I’ve only used Ubuntu and Arch Linux. I switched from Ubuntu to Arch Linux because Arch

To me Ubuntu is sort of the midpoint of Windows and Arch Linux. It’s a bona fide Linux system, but there are a lot of pre-installed parts and a lot of things that are hidden behind graphical interfaces.

X-4b. Should I switch to Arch Linux?#

Note well: if you are new to Linux, installing Arch will be a trial by fire. This is not necessarily a bad thing; it might actually be better this way if your goal is to learn about systems, because by the end of the process, you will know way more than you started with. Just be aware of it and probably block out a week or two.

X-4c. Which Linux distribution should I use?#

I’ve only tried two distributions, so I have no comment here, sorry. Search the web.

X-5. Why are you so obsessed with the terminal?#

I think the analogy in my head is like, when you use a terminal, you are kind of “talking to the computer directly”, rather than going through some user interface. It’s sort of like, once you know LaTeX, you wouldn’t want to go back to the mouse-based equation editor, because it’s faster to just type \frac12x^2+3 than to click on the fraction button, then type 1 and 2, then press the exponent button, and so on. Using the command line is like that but one level higher — it controls all the files and applications.

Here’s an example of one way being able to talk directly helps. Terminal commands have something called standard input and standard output. So, programs can read in text from a stream (or file, etc.), and they will print the output to terminal by default. Meaning you can compose the programs together with pipes, feeding the output of one program to the output of another.

For example, suppose you have a program foo that downloads the list of participants on a contest sorted by score. I want to find all the participants with surname Chen, sort them alphabetically, and then put the result on my clipboard. Roughly, this is foo | grep Chen | sort | xsel --clipboard.

Of course, without a terminal you could also run a graphical program, open Google sheets, copy the results in, use the filter menu, then sort it, and finally Ctrl-C the result. But why be so roundabout? You know what you want, just say it.

Pushing this example ever further, if you find yourself doing this exact sequence several times, you can write alias meow="foo | grep Chen | sort | xsel --clipboard". Then in the future you can just type meow and have this done in four keystrokes.

The fact that all terminal programs read and write in a uniform way is exactly what makes this possible. Programmers like this simplicity and elegance. They like it so much that software made for sophisticated users often doesn’t bother to provide a graphical interface. This is the same reason why command line flags or configuration files tend to be text-based on Linux: this means they can be manipulated in any editor, transferred from one computer to another via Git, and so on.

Also, Fish autocomplete is life-changing 🐟 ❤️ 🔥 (zsh is good too I hear.)

Pretty similar to reasons I use Linux.

The last item is the most important one for me, and also the one that will be most foreign to newcomers. Modal editing which means that there are different modes for entering text versus navigating the document that you constantly switch between. So when you are typing new text, Vim behaves much like a standard editor, with every keystroke adding one character. But when you are editing or moving, instead every keystroke is a command (no ctrl needed). Here’s a picture of what my cheat sheet looks like: taken from vi-emu (Dvorak keys): 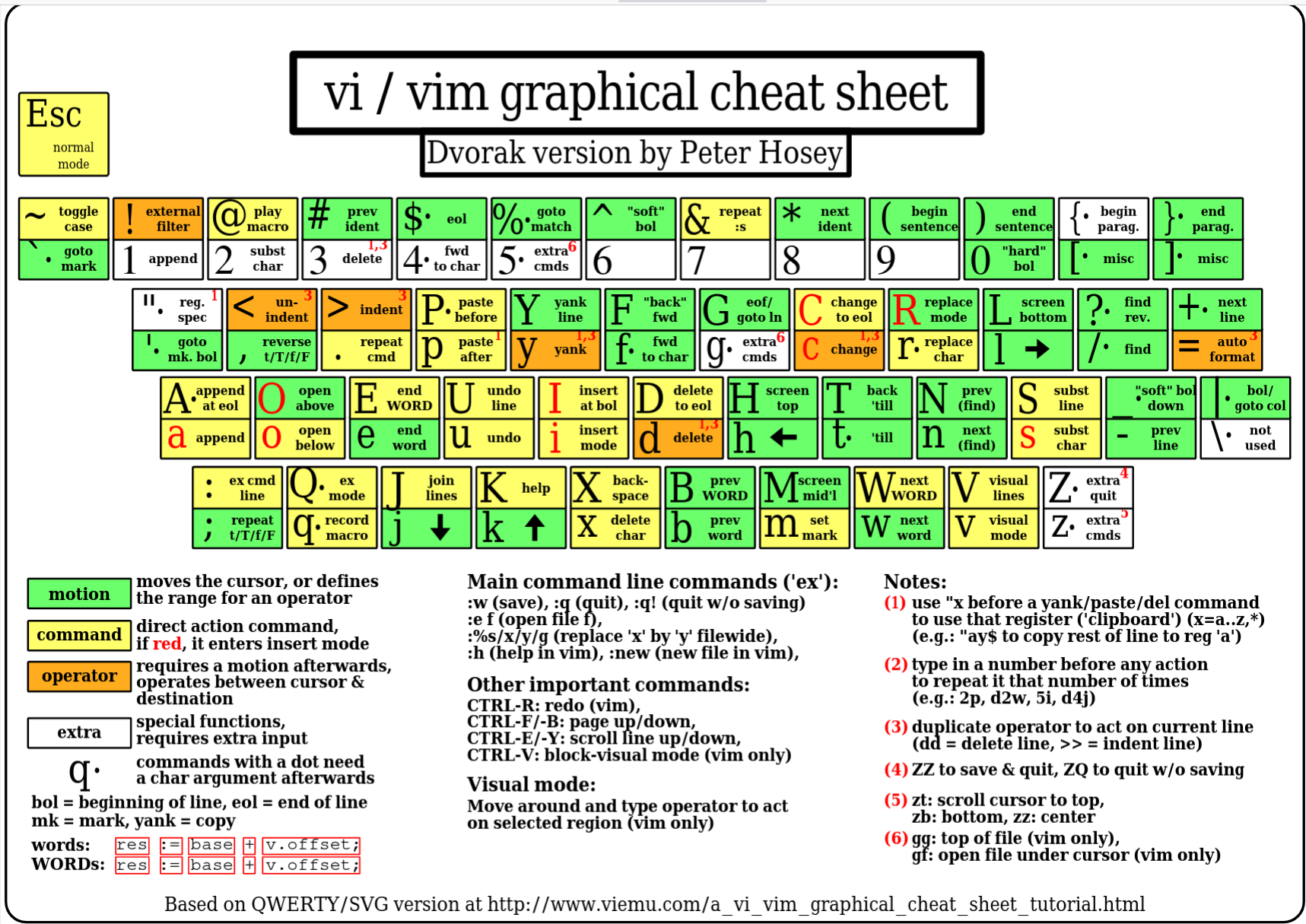 That means that if when you want to do a specific thing like “go to line 100” or “go to the end of this paragraph”, you can type what you want (100G or } respectively in this example). The entire keyboard lets you navigate: basically every single key becomes a navigation tool like “go to end of line”, “delete line”, “copy line”, “append to end of line”, and so on. More comprehensive.

The main downside to Vim is that there is a learning curve. I paid that price long ago 😉

Reproducing from the learning path:

For beginners, there are a ton of “basic” text editors that support syntax highlighting and some basic quality-of-life features, and are simple to use. Some of the popular ones include

Visual Studio Code (abbreviated VS Code) is also extremely popular, although it’s a bit more sophisticated than the beginner ones above.